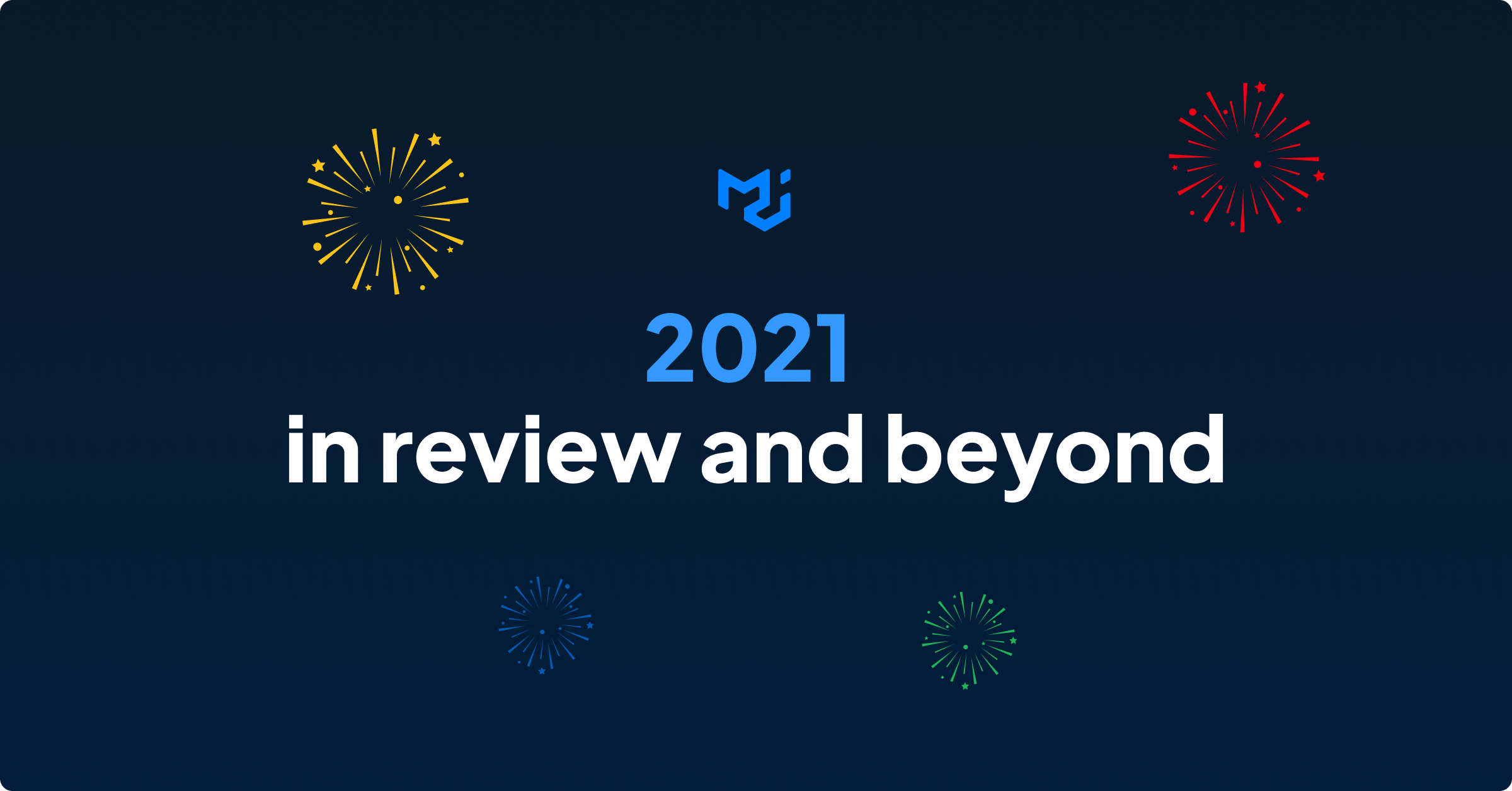 2021 has been another amazing year, not only for MUI but also for the React ecosystem and our users. The digitalization of the economy is accelerating, pushed by COVID-19. Developers and designers have been, more than ever, busy creating apps.

We spent our year making it faster and easier for you to build great UIs and to delight your users with amazing UI experiences. Thank you for being part of this journey!

It's only with your trust that we could achieve the following outcomes in 2021. Thank you!

The numbers speak for themselves. We have reproduced the traction we got in 2020.

When we started 2021, we had recently released the first version of the MUI X data grid and were in the middle of the release of MUI v5. We had committed ourselves to fully execute these two major efforts:

What might have been the biggest change in 2021 is the implications of a larger team for the organization structure. We have reached an inflection point at around 10 people. I could no longer look at all the GitHub issues and PRs. At that point, it was requiring >70h/week to do it correctly. It was not scaling to have one individual aware of all PRs and GitHub issues. Continuing in this direction would prevent us to grow the team, and more importantly, it was distracting me from the core CEO responsibilities (people, vision, funding). So we have broken down the responsibilities We have introduced our first layers of management and defined more clearly the purpose of each role.

We have achieved most of what we could have hoped for.

I have been involved on MUI for 7 years and almost 3 years full-time now. It's amazing to see the progress the library has done since then. But at the same time, I'm astonished by how far we can still push the mission forward. My experience has been that the more we improve the library, the more we envision future ways to do it better. It's still day 1.

What's our mission? To empower as many people as possible to build great UIs, faster.

2021 was great, 2022 is going to be even more exciting! We will continue in the same direction. Here is a breakdown of our roadmap.

The release of v5 has introduced a significant API churn in the community. While our versioning frequency aims for one major per year, we hope we can iterate on v5 during the whole year of 2022 without any breaking changes, e.g. taking full advantage of the new style engine.

To continue improving the customization experience, we will double down on the version of the components without styles: @mui/base. These components and hooks contain the main functionalities and accessibility, without being opinionated about how styles are applied or what styles. We still have work to do to have a full set of unstyled components.

You can read more about them in the docs and keep track of our progress in #27170.

There a number of improvements that we can bring to the system (the npm package @mui/system used to create the styled components). Hopefully, we will bring native support for CSS variables, improve DX, and improve performance.

We will continue in the direction of 2021. While Material Design is a predominant design choice for building rich client-side applications, it's not the only popular design trend. We plan to provide a second design system to expand the range of use cases for MUI, striking a balance between:

It will be built on top of the unstyled components: MUI Base and our styling library: MUI System.

The recent data grid product initiative is working, it's time to scale MUI X by growing the team and the product scope.

We will keep the data grid as our primary effort, there are many features left to be built 🚧. Our efforts will include: doubling down on the documentation, releasing the Premium features, and working on a hook-only API.

MUI Core had not enough bandwidth to work on the pickers components. So we will expand the scope of MUI X to the date picker components, taking ownership and resuming where the work was left.

Pro-code (writing code in a regular programming language) has been an incredibly effective way to deliver on our mission so far. The two main benefits reported by developers in our 2021 survey for using MUI are "moving faster" and "ease of use". However, the data points we can find suggest that the demand for developers in the next 5-10 years is growing a lot faster than the growth of the workforce. The importance of these two benefits is only going to increase, it's critical for MUI to keep pushing the envelope of what development speed and ease of use look like for developers.

Entering low-code, we have a small team that will continue explore in 2022 how MUI can empower developers and knowledge workers to build apps more visually, up to x10 faster, with no advanced SQL or JavaScript knowledge. The goal is to write fewer lines of code, while still empowering developers to extend it with custom logic.

If we sustain the current growth rate in 2022, we should be able to grow the team from 14 to 40 members in the company by the end of the year (based on the self bootstrap revenues). The primary purpose will be to strengthen all the efforts that we have started, not starting any new ones until we reach a great level of execution on all the above.

At a high level we are guided by the following rock beliefs:

If like us, you are excited about bringing joy to developers and enabling more people to build beautiful apps faster, check our positions, there are 8 open roles as of now, we are hiring!

You can help us shape these new packages by taking part in discussions. RFCs are waiting for your feedback. Don't hesitate to let us know what you think!